Is Lowering The Drinking Age A Good Idea? 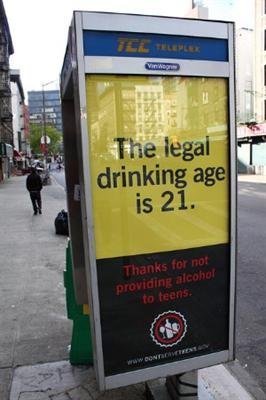 This Los Angeles Times article by Jessica Pauline Ogilvie reviews two perspectives on lowering the legal drinking age.  Advocates of a lower drinking age point to the tendency of current law to push underage drinking into uncontrolled environments such as illicit parties and frat houses.  They also argue that a higher legal drinking age just delays inevitable fatality and injury statistics until later in life.  In other words, current law does not effectively confront the problems of binge drinking and associated risky behavior that it was designed to address.  Opponents suggest that early drinking is harmful due to the continuing development of the adolescent brain and concomitant vulnerability to the effects of alcohol among young adults.  They also cite studies that link early drinking, even in safe, experimental settings, to binge drinking later in life. This information is valuable to parents and any who are responsible for the development of adolescents and young adults.

It’s difficult for many college-aged students, especially freshmen and sophomores, to really know their limits when it comes to drinking. A lot of new students feel like they are finally free to do whatever they want when they enter college. This attitude, coupled with an environment that often encourages binge drinking, can lead students into alcohol and drug abuse. Even though raising the drinking age lowered alcohol use in high schools, rates of use stayed the same on college campuses. So no matter what the legal age, college students are still more at risk to abuse alcohol. We help students find recovery all while reintegrating themselves on campus. If students do find themselves in a situation where they can’t control their drinking or using, we want them to know that there is a solution.